skip to main | skip to sidebar

I should have taken a picture.

One day I came across this blog. http://thingsorganizedneatly.tumblr.com/

That night I made a salad for dinner, (Chicken ala taco seasoning, peppers, corn, lettuce, tomatoes, olives, carrots, kidney beans, crushed corn chips...), all tossed together. My daughter usually will pick the olives out and one or two other things that suit her fancy, and simply just won't eat much, and then sneak in and make herself a peanut butter & big mess sandwich later on. Well instead of just putting a pile of salad on her plate that night, I organized it, neatly. She ate it all. Now the other kids want theirs the same way.
Posted by Pam at 12:59 PM 1 comment:

Because I can't handle the poop post being at the top of my neglected blog...

My daughters like to pretend to be animals. In particular, little yippy puppies. They crawl around on all fours and come up to me begging for attention and asking me to scratch them behind the ears. One day the yipping was too much for me and I declared it to be Platypus Day! That put a stop to the obnoxious noises because no-one could make the platypus noise. Since then, when they get a notion to pretend to be animals, they come to me and ask me what day it is. A few days ago it was Beaver Day. We watched beaver movies on youtube and learned all about beavers, then we built lodges out of pillows and blankets, also we had recently gone on a little hike where we discovered signs of beavers building a dam. My husband and I also made numerous jokes using the word dam, we are quite clever...

And to get to the point... Today we were at the grocery store and all of a sudden my son said "Look! Beaver eggs!" I looked and beheld...chicken eggs... I was busy trying to keep all 4 kids in sight and figure out which yoghurt really cost less... 10 for $4, or 10 for $6 (math is really hard when the kids are running wild in grocery store) My son exclaimed again "Beaver eggs!" This time I looked where he was pointing, up above the eggs high on the wall in huge letters it read "Beverages." The end.
Posted by Pam at 10:46 PM 3 comments:

The following is an entry from my husbands journal written to my daughter:

We head on back home
to continue your day...
we plan on some fishing
and then we will play

You’re there smiling
as you sit in your chair
eating the berries
you’re unwilling to share
with your parents both busy
only vaguely aware
little do we know
that we should beware
If only some ominous music
would have played in the air!

I am taken aback
and slightly appalled
to walk in and discover
you have eaten them all!

“What’s going on??”
“Who’s going to come”
“I need communication”
“You’ve given me none”
By this time I’m about
ready to run

We go to Wal-Mart
You grab a big yellow ball
You kick it, grab it,
jump on it and fall
But when it comes time to buy it
you don’t want it at all.

The kitchen is decked out
in bloons, many colors
your cousins are there
with your sisters and brother

It’s time for a bath
Can things get any worse?
Your mother’s holding back tears
and she’s ready to curse

I dream about fighting
Gerard Depardieu
I awake to discover
that none of it’s true
I’m feeling relieved,
…..until I find you

Confused I bend down
I unknowingly stoop
and to my unbridled horror
I discover it’s poop!

And what is that color
that unmistakable hue?
It dawns on me what happened
this poop is all BLUE!

To the bath with you child!
my poor little daughter
I can’t clean with wipes
I need some hot water!
I notice Mom’s woken up
I’m sure I’ll be slaughtered

To top it all off
While I watered our tree
I got to close to the beehive
And got stung, by a bee.

So happy birthday my daughter
This one sure wasn’t a bore,
Please forgive me for not
looking forward to four.
Posted by Pam at 8:31 AM 3 comments:

You know in that movie Signs, how the kid leaves glasses of water all over the place? Well our kids do the same thing. They fill a cup of water up, drink a little and save the rest for later. Later, when they are thirsty they get another cup and do the same thing all over again. Thus our kitchen is booby trapped.

Well, today I was summoned to the kitchen by my crying baby, who I found crawling in a puddle of water. It was also all over her back and head and face. I figured she had pulled a cup of neglected water onto her head, as she has done this before. Laughingly and soothingly I picked her up, not worried about getting wet too, it's summer, it'll dry. She grabbed at my face with her wet hands and I wiped the drips out of her face with my shirt. As I did this I was looking around for the cup that had once contained the water, there was one on the table that was empty except for a drop or two proving that it had recently held water, but it was too high for the baby to reach... At the same time I observed my 2 (almost 3) year old walking down the hall trying to put on a new dress. "Mom, I peed." Ewwww. I proceeded directly to the bath.

Funny huh? Not the end of the story. There is a happy ending.

After the bath I tackled the cleaning of the floor. The 2 year old wanted to mop too so I gave her a turn and told her to clean up her pee. She happily took the mop and headed to another section of the kitchen. Much to my delight there was a puddle of pee over there! I was very happy to know that my baby had not been peed on and had not wiped it on my face! It had really been water all along.

And to settle the mystery as to where the water came from... I questioned my daughter a little more and found out that she had dumped a cup of water on her baby sister. Yup because that is just the kind of kid she is, the kind that will randomly dump water on someone to see what happens. I'm sure she was less than happy to see that it didn't cause the baby to melt into a sizzling pile of goo.
Posted by Pam at 12:25 PM 2 comments: 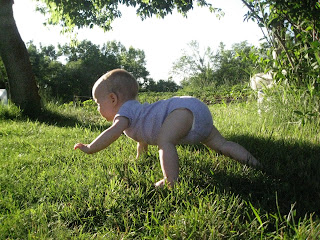 And she stalks chickens. 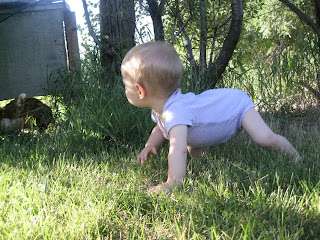 Maybe I should ask her where the missing hen is. 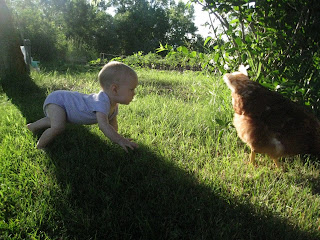 Wherein the usefulness of my education comes to a head... 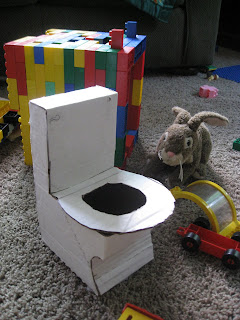 Many of you have probably been wondering if my 2.5 years of higher education was beneficial to me in my chosen vocation as a stay at home mom. I can now definitively tell you that it was. Through the process of designing and developing this bunny's potty I called directly upon the skills learned in my Design Theory class, Art 101, and one of my interior design studio classes. Granted, in school I would have stayed up till 4 in the morning to finish such a project as this. Real life has certainly improved my time-efficiency. This beauty took all of about 10 minutes to make!
Unfortunately, it's much easier to convince a stuffed rabbit to use a toilet than my toddler. (Is she still a toddler, she's almost 3?)
And for my mother, here is a shot of the back of my girls heads. It's also proof that I brushed their hair once. 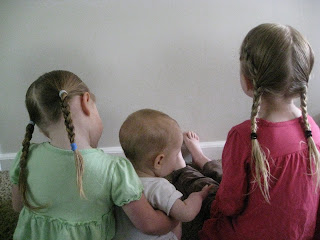 I want to do things and create things, but that would complicate life and there is no way I could complete anything right now. So I content myself with moving the furniture around every couple of weeks. I was moving a bookcase the other day and the kids all piled in. 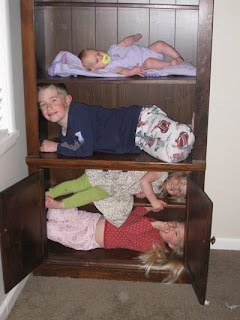 What I really want to do is get rid of most of the furniture and paint all the rest black or white. I can't decide. What do you think? Black or white book shelves? And while I'm at it I think I'll cut my hair really short.
Posted by Pam at 8:53 PM 4 comments: